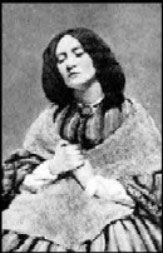 Elizabeth Siddal could never have imagined that her life would lead to her almost drowned in a bathtub while being painted by Sir John Everett Millais. It was hard to be the muse to painters in 1852, to be seen as important for the work but not existing outside art. The Pre-Raphaelite brotherhood was created in 1848 to create Art that was going back to what they thought were Medieval Sensibilities and paint what they thought were worthy subjects such as the bible or Shakespeare (Millais was creating his downed Ophelia painting).

Elizabeth Siddal reminds me a great deal of Sybil Vane from A Picture of Dorian Gray an actress that impresses the main character Dorian. It is her performance in the theatre that makes her a prize to him but when she falls in love with him instead she loses her strength as a performer. Disguised that she is no longer acting the way that he expected Dorian rejects her which leads her to kill herself. It is here that he recounts a famous selfishness by saying that for fifteen minutes he was distraught at her death but then was recovered. The reason that this fictional death reminds me of Elizabeth Siddal is that while these women existed outside of the relationship when it develops they are expected  to drop everything in return. While Dorian wanted her to still be an amazing actress there is a sense that this is no longer the case for her, that these women only exist in their connection to men such as Dorian, rich and powerful. This is highlighted for Elizabeth Siddal who was expected to suffer for the beauty of Art.

Elizabeth Siddall was born in 1829 later she would shorten her name to Siddal. She was working class and so found work as an assistant to a milliner. It was here that in 1849 Elizabeth Siddal’s life would change when Walter Deverell happened to walk in and ask her employer if she could model for him.

It was Dante Rossetti who would become the most captivated by Elizabeth for her beauty drawing her image consistently they would marry in 1860 after a nearly decade relationship that was on and off. It is always difficult to truly understand a different person’s relationship, what is normal really? It is obvious though that they had a great deal of attraction or love for one another it is possible to see that Rossetti was possibly quite absent to her affections in that time. 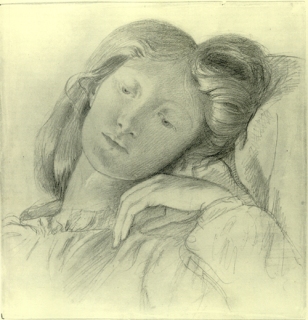 A frightening thing can occur with artists is that the muse only occurs within this space and they can be seen as little more than their connection to the Art. It doesn’t always occur this way, for example Leonard Cohen wrote when his muse died not that long before he would that “And you know that I’ve always loved you for your beauty and your wisdom, but I don’t have to say anything more about that because you know all about that” there is a tenderness in the way that Leonard says his goodbye to his muse, the way that he views her as an entire person. It feels less of a goodbye to the muse but to a person. Elizabeth wouldn’t have this fate as seen after her death when Rossetti would disturb her resting place to retrieve his poems that he had flung into the coffin.

Elizabeth in these times began the create Art herself, I am not an Artist but there is a haunting quality to the self-portraits that she would make of herself it was like the eyes are darkened giving them this quality. I wonder how she was feeling in this time to be painted by these men that valued art above all else. As a writer I can see the appeal that takes hold of these Artists, I myself write this in a type of frenzy so important it feels to discuss the lost potential of Elizabeth dead at the young age of thirty-two. The point is that Elizabeth was talented and it is ashamed that she is greatly remembered as the model than as a creative person in her own right. When she had separated from Dante it seems that she even attended an Art school in Sheffield which shows her commitment of her own art.

It seems that Elizabeth spent many of those ten years trying desperately to gain Rossetti’s affections especially when he became infatuated with a different model Annie Miller who was involved with William Holman Hunt (a man with a very impressive beard). It seems that Rossetti would go between being attentive when she was ill to being absent again. There are arguments that she may have pretended to be sick to get his attention but as she was also becoming addicted to laudanum and had become weakened due to nearly dying modelling Ophelia it seems that she was actually quite sick at this time. As his muse she was always trying for his affections and her illness was only one way he seemed to be attentive. The idea of the dying beautiful woman would be highlighted in many artistic works such as Edgar Allan Poe which is quite frightening in retrospect, that women on the edge of death are weak and more appealing.  It was in 1860 that is seems that her family believed that she was dying, it was here that they would be married after all those years in partnership.

It was after this marriage that is became particularly tragic, in a time when women and childbirth was a dangerous and risky thing that often led to the death of either the mother or the child and in many cases both it leaves the question on how did women deal with these deaths? To lose child after child and continue to have more in the hope that these will survive must have had damaging effects to a great number of women. It seems that already dealing with problems in her new marriage Elizabeth couldn’t cope when she lost their daughter to stillborn.

According to Lucinda Hawksley, Elizabeth was changed with the loss of her child, that she would sit in the drawing room and sit staring at the fire, if there wasn’t a fire she would stare into space. On one visits by Ned and Georgie, Burn- Jones it seems that Lizzie was in her room alone staring at the empty cradle gently rocking it. As they walked into the room she told them to be quiet so that they didn’t wake the baby. In her grief had Elizabeth created a child that she didn’t have? It sounds like she had. Georgie would find it sad but in his arrogance her husband would call it being melodramatic, there was a distance in that time between child rearing and men. Georgia who was pregnant could see the connection to herself, there was a possibility that she too could become mad in infant grief and while Rossetti was kind in that he never did lock up his wife as so many men did when they had mental issues. For the problems of their relationship he did allow her to grieve he could have moved all the babies stuff and pretended that the child never existed.

When she fell pregnant again it’s hard to consider what her mental state may have been but the fact is that Elizabeth was becoming more and more addicted. What is known is that she dined with the poet Algernon Swinburne and Rossetti. It seems that she went home while Rossetti continued on to an engagement at the Working Men’s College. When he returned he found her in a coma due to a Laudanum overdose, he summoned a doctor and then summed three more when that Doctor said he could not save her. She would die in the early hours of February 11, 1862.

Rossetti in his grief continued to paint Elizabeth because truly I don’t believe that he intended to be the source of her pain for many years. There was love there but he was careless, a man that valued himself over everything else which accounts for his absolutely disrespectful treatment of Elizabeth in death. I should point out that I don’t believe in disrespecting the death, I particularly am against the profit that has occurred from real events such as Amityville horror and the exorcism of Emily Rose both making money off people’s tragedies, in both cases young people were murdered and reverence should be given. Sometimes I believe people are so ready to think of supernatural elements that they forget the person that died for that. Elizabeth is an example of this, as Rossetti who in grief would throw his manuscript of poems into the grave with her. He would seven years after her death get her exhumed to retrieve these poems for publishing. It was here that the story of her hair flowing out of the grave would be immortalised. Once more in death Elizabeth would be seen as simply her appearance when she was so much more than that.

“I watch the shadows gather round my heart,

I live to know that she is gone

This is a text widget, which allows you to add text or HTML to your sidebar. You can use them to display text, links, images, HTML, or a combination of these. Edit them in the Widget section of the Customizer.
%d bloggers like this: